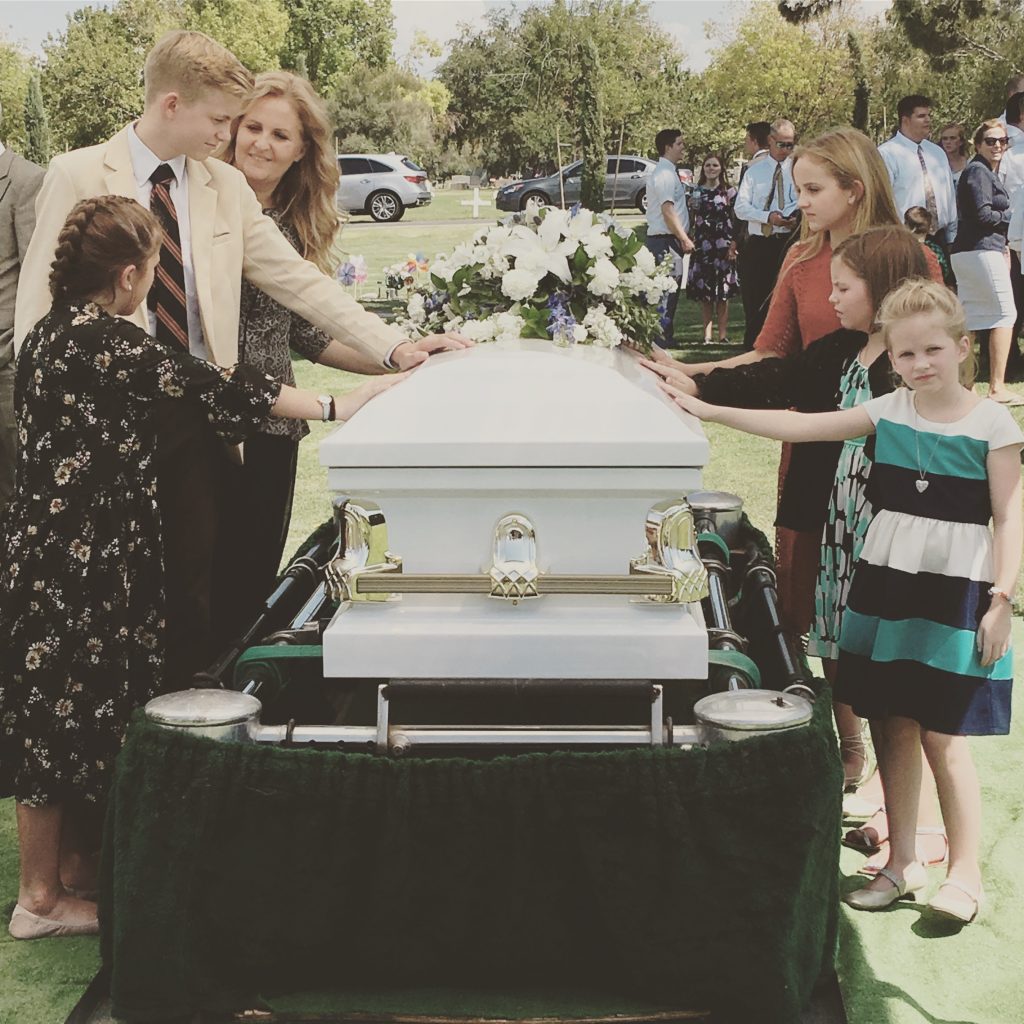 Today I felt calm. We got to the church and everything was handled with care and precision by our church leaders and the funeral home. There was a massive turn out that filled the entire stake center to capacity. Amos is definitely loved.

My love for Amos grew today and I was filled with thoughts of the wonderful day we would be reunited.

I’ll share a little each day as photos, videos, recordings, memories and thoughts of the funeral proceedings come in.

Today I’ll share the life sketch delivered by Porter and my nephew Nick.

P: My dad was born December 11, 1975 in Malad Idaho, the 2nd son of Dean Abplanalp and Sandra Carol Sagers. He joined big brother Tom and 2 sisters, Tracy and Katie Jo.

N: He was happy baby, and nick-named fat boy by his dad. That name only stuck till he was about 3 because he just grew straight up. He had the same sized waist at 12 as he did as a baby.

P: He loved life, always had a big smile on his face and ran before he walked.

N: He was almost 3 when his family moved from Malad to Blackfoot. He and Tom thought their hearts would break in two when they had to leave their beloved babysitter, Trudy. But she made many trips to Blackfoot to continue to hold her spot in the family.

P: When baby sister, Abbe joined the family later that year, the family was complete.

N: On their little country road, Amos had a gang of friends. He would be gone in the morning until the sun went down occasionally coming in for lunch or cookies.

P: One day he was at the neighbor’s when his mom called him to come home. After calling him several times, his friend’s mom said “Amos, your mom wants you”. He said”Oh, I thought that was my imagination. Everyone has one, you know.”  And boy did he ever have one.

N: He had his own way of describing things. One day they were going to Grandpa and Grandma Sager’s house in Burley. At one point a bored little voice from the back seat asked, ” How many more go unders till we get there?  His parents looked at each other like “go unders”?  They finally realized he meant overpasses.

P: Even though he was a happy child, he liked to get his own way. He usually did, but when he didn’t, he could throw a pretty mean temper tantrum. He would hold his breath till he turned blue, scaring his mom half to death. Thank goodness, he outgrew those before he started school.

N: Amos loved to learn. He ate up anything new he heard and never forgot anything. His 4th grade teacher once told his mom she wished she could have a whole classroom of Amos’s. He never lost that need to learn everything he could.

P: Dad’d greatest knowledge came from the scriptures. He absolutely loved the gospel and its teachings of our Savior.  His favorite scripture is 3 Nephi: and 27:27. And know ye that “Ye shall be judges of this people. According to the judgment I shall give unto you which shall be just. Therefore, what manner of men ought ye to be.”  Verily I say unto you, even as I am.

N: When he was 9, his mom and dad divorced which was devastating to the little family. But when his mom married Evan Dance, everything was okay again. Amos had an instant bond with Evan. They truly loved each other. Just recently, Evan introduced himself as the step-dad and Amos got upset and told him to never introduce himself as the step-dad. He’s just dad. He has two #1 dads and he loves them both.

P: He not only got a new dad, but 3 new brothers: Russell, Jeremy and Dustin and 3 new sisters: Jennie, Amanda and Hilary as partners in crime. My dad grew up on a potato farm west of Blackfoot moving pipe, hunting rabbits and owning the desert. That’s where he gained a desire for an education. He was dang sure he did not want to move pipe for the rest of his life.

N: Amos loved sports. He grew up playing little league baseball and basketball. He once pitched a no-hitter in an All-Star Tournament and was named MVP. But his real love was wrestling. He started when he was 4 in free-style tournaments. His big brother, Tom was a wrestler, and he loved his brother, so he wanted to be a wrestler, too. He was always in the lightest weight. When he got to high school at Snake River, he had to eat to get to the lightest weight class. While his brothers were going to bed in down parkas, hats and down sleeping bags to lose weight, he was eating to gain. Didn’t make him too popular at home at the time.

P: My dad was on 2 state championship wrestling teams his Jr and Sr years. He finished 4th in the state his Sr. year. His love and passion for wrestling never diminished.

P: He also said Fast Sunday should be called slow Sunday because he was always so hungry by the time he was able to break his Fast. His favorite Primary song was “I Hope They Call Me on a Mission which they did. He served in the Canada Toronto Mission for two years, once again following in his big brother, Tom’s footsteps. He had served there 2 years before.

P: As soon as he returned from his mission, he left to further his education at Brigham Young University where he quickly met the love his life and eternal companion, Hillary Clair Mann.

N: Amos met Hillary the summer just after his mission before he even started a class at BYU. He had a personal commitment that he was never going to spend money on someone else’s wife so 6 weeks after meeting Hillary, the first dime he spent on her was for an engagement ring.

P: They were married a few weeks later before the fall semester at BYU started. Mom and dad worked through college and it was almost 5 years until they were able to have children. They were so excited to find out mom was finally pregnant with me!

N: After Porter was born their lives got difficult as they tried to balance school and work and parenting. Amos did a psychology internship at the Utah State Prison then worked nights at a mental health facility. He went to school and slept in a hammock on the deck of our apartment with Porter during the days. Hillary worked days and cared for Porter at night.

P: Dad graduated from BYU just in time because babies only sleep 20 hours a day for the first little while. Our little family then moved from Utah to Arizona for graduate school at ASU.

N: Amos would do anything for his wife and was happy to select a school that was close to her family. He helped her start a music school in down town Mesa.

P: Dad loved mom but he hated to DJ karaoke nights at the music school. A thousand preteens asking him to put on the same songs over and over got old fast.

N: Thank goodness for his brother in law Ken who provided some real entertainment with Van Halen’s JUMP or Guns and Roses’ Welcome to the Jungle. Amos would only ever get up himself to sing one song;

P: Soon my sister Evelyn was on the way. Mom taught high school music and dad held down the fort while he continued in graduate school.

N: Amos loved to cook and loved caring for his wife as she struggled with the morning sickness that came with each child. While they had Kirra, Ruth and Blakely, Amos taught high school to emotionally disabled students and also and coached wrestling.

P: My parents loved having summers off together and traveling to Idaho to visit grandma and grandpa Dance.

N: Amos had many callings in the church that he loved during this time. His favorite was Cub Master. He would dress up and become different characters for pack meetings. He was also the young men’s president and enjoyed preparing his priests for missions.

P: His main purpose in life an one he honored was to preside in our family as a husband and father. He made it a point to eat dinner with us and talk with his children about our lives and struggles. He held family home evening each Monday night and held family prayer and scripture study each night with great consistency.

N: After becoming highly qualified to teach many high school subjects, he felt a desire to go back to school himself and return to his original goal in the field of psychology.

P: As he accomplished that goal and became a licensed counselor, a job opportunity took his family to the prison town of Florence. He was shortly called as Bishop and 3 months later received a cancer diagnosis. He worked hard and served his church and family for a year and a half as his body declined and he was released as bishop just before passing away on September 7th, 2017.

N: This past year Amos’s fear wasn’t of dying but of not being able to provide for his family or see them accomplish their goals. He was given a tender mercy to stay long enough to baptize all of his children and witness a small piece of the great things they will do in this life.

P: My dad was understanding, wise, patient, funny, humble, kind and loved by all who knew him.