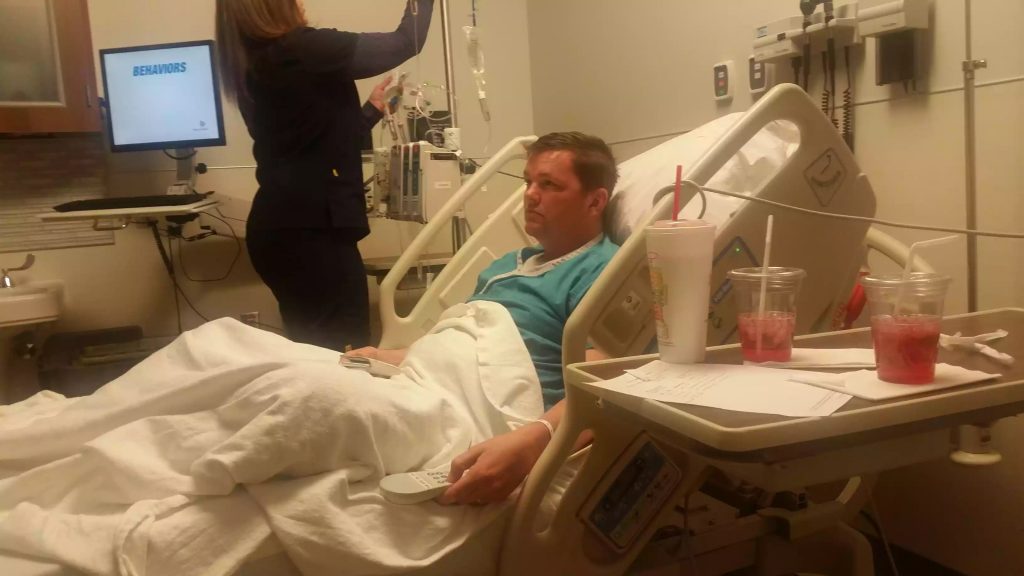 Amos had his last round of chemo today. His white blood cell count was low and he is low on iron but numbers were normal enough to proceed. We didn’t get a cancer marker today or get a chance to talk to the doctor about what might be next. He will have CT scans again in two weeks and we will go from there.

We were happy to have his regular nurse Misty back today. She takes such good care of him by getting things done quickly and making sure he has a room with a bed instead of a chair. I love it when we get a room because he lets me snuggle. Today I asked him if he wanted me to go get the car washed. He held me tight and asked me to stay.

After chemotherapy a couple weeks ago, I didn’t think it could get worse, but today’s effects have been even more difficult for him. He has always had nausea but is not usually able to vomit. Today he actually did for the first time but said it didn’t help. He is also having stomach spasms and problem with his vision again. Tonight Kirra prayed that he would be able to ask for help if he needed it. He thanked her for that and said he might need me to drive him to work tomorrow.

Sister Riedhead picked up our girls for us today and Sister John brought us a delicious dinner. Amos wasn’t able to get out of bed and eat so the girls went up to sing to him for a while. Somehow it relieves his feelings of despair. He was able to eat and come down for scriptures and prayer a little later after I got home from visiting teaching.

My sister Missie had her surgery today. She is recovering well and they think they got all the cancer out! #answeredprayers #teammissie

I found out that my sister Phoebe collapsed last week because of an existing heart condition and had to be taken to the hospital in an ambulance. We are taught to bare one another’s burdens but I feel that sometimes she physically takes on the burdens of those around her. Love you Phoebe.

Kirra and Ruth had a school-wide Battle of the Books competition today. Kirra got first place and Ruth got second! They are on to district. Sadly we have a conflict that night so we will have to find friends they can go with. Good luck to my awesome readers!

Having everyone at the kids’ schools find out that Evelyn auditioned in front of the judges for America’s Got Talent made for an interesting day. The reactions from peers were mostly good but Kirra had a conversation with someone who unkindly said Evelyn probably got X’s from the judges. Kirra knows she isn’t allowed to tell anyone what happened so she responded with the word stupid. As I was teaching her that we don’t direct the word stupid at people, Porter chimes in with, “Ya, Kirra, use the words ‘intellectually inferior’ because then they won’t even know what you’re talking about.” What am I going to do with that son of mine? Parenting is hard enough without being ‘intellectually inferior’ to our children.